Why You Should Try pyinfra Sat 30 November 2019

These days tools to automate, provision or configure servers are dime a dozen. There’s Puppet, Chef, Salt, Ansible and so on. They all suffer from “over abstraction” - each has it’s own syntaxes and debugging processes. This is far removed from a manual provision over SSH, where feedback is instant. These tools work a dream, until they don’t.

This is why I built pyinfra.

pyinfra is what you’d get if you merged the good bits of Ansible and Fabric together. It’s flexible (all the Python packages), super fast and facilitates instant debugging. -v gives you the raw output as it executes commands. It works by executing simple shell commands, as you would doing a manual provision. This has the added advantage of a --dry flag for dry runs.

If you know Python then you already know how to write pyinfra inventory & operations. Better still if you know Ansible, you’ll understand the concepts of groups & data too.

This is roughly what you’ll see:

So - why should you try pyinfra; what sets it apart from other tools?

Everything in pyinfra is Python - inventory files, data files, operation files. This means they are all compatible with Python packages. If you need to do something in pyinfra you use the existing Python package. Setup an EC2 instance to target, manage encrypted secrets, call an API - the possibilities are endless. Check out the example deploys.

One of the nice things about deploying “by hand” is that, when something goes wrong, you get instant feedback via stdout/stderr. This is not true for most deployment tools.

Because most pyinfra operations execute shell commands, feedback is instant. If anything goes wrong pyinfra will give you any output immediately. If you want to follow both stdout/stderr as the deploy executes, add -v.

pyinfra works over SSH and only requires a shell on the remote side. There’s no daemon or even Python required. If you can SSH into it, pyinfra can deploy to it.

pyinfra can also build Docker images, execute with subprocess and read Ansible inventories. Other execution targets and inventories are trivial to implement.

In an agentless system, where a single process handles the entire deployment, performance is key. One of the reasons I started pyinfra was frustrations with Ansible’s (at the time) slowness. pyinfra boasts significant performance gains over Ansible and falls much closer to fabric: 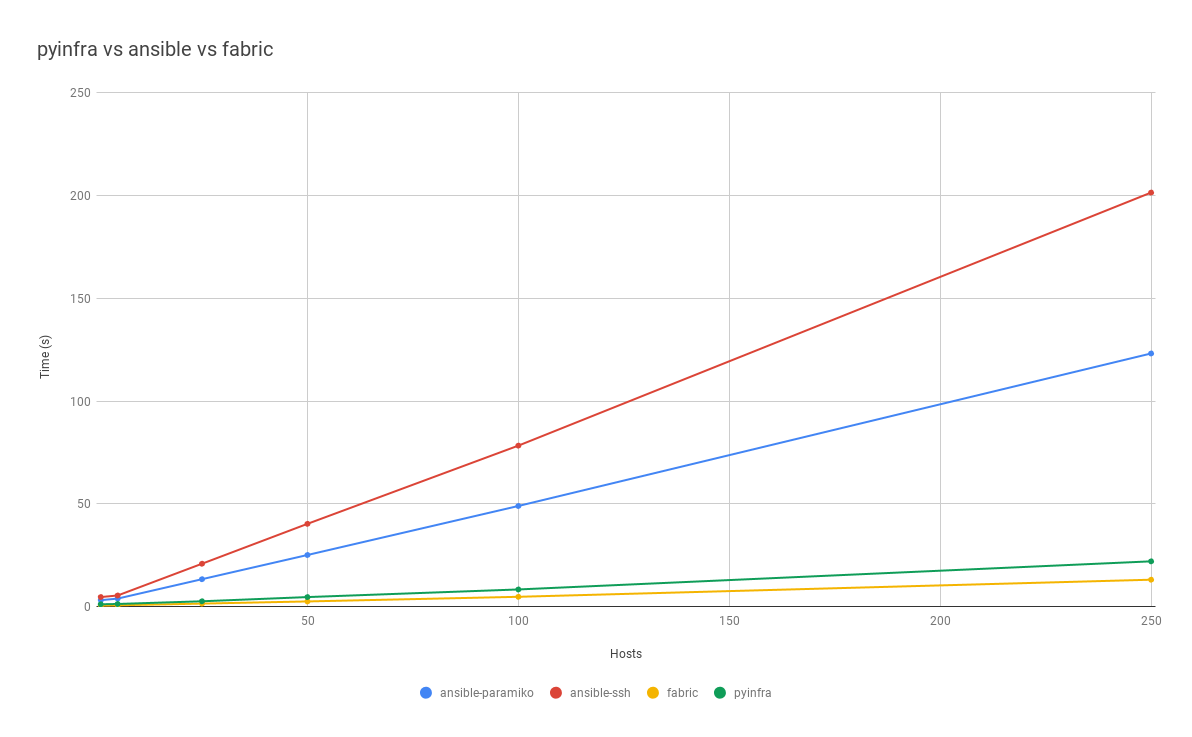 So, if you’re still here, why not try pyinfra?